The training of horses relies on their tractability and the ability to extinguish or overshadow their innate inter- and intra-species behaviours, such as flight and sexual behaviours (McDonnell, 2003).  In the process, desired innate and learned behaviours are shaped and modified to suit human desires for sport, show, performance, and leisure, training horses to perform tasks that are in opposition to their innate preferences (McGreevy & McLean, 2007). Two notable examples include jumping obstacles they would otherwise avoid and the tolerance of a human (some may say ‘predator’) on their back (Goodwin, McGreevy, Waran & McLean, 2009; McGreevy & McLean, 2007; McGreevy, Oddie, Burton & McLean, 2009; Starling et al., 2016).

Horses have not evolved to be ridden, nor have humans evolved to ride them, which may explain the high numbers of casualties from equestrian pursuits (Goodwin, 2009; McGreevy & McLean, 2007; McGreevy, Oddie, Burton & McLean, 2009; Starling et al., 2016). Statistically, equestrians experience more injuries per hour than do motorcyclists, with the majority of injuries involving the head, spine (Papachristos, Edwards, Dowrick & Gosling, 2014), and chest (Davidson, Blostein, Schrotenboer, Sloffer & VandenBerg, 2015). In 2009 there were an estimated 78,499 reported equestrian-related injuries in the United States. While the majority of those injured (67,196) were treated without hospitalization, 11,250 equestrians did require hospitalization, with an undisclosed portion of those seriously injured dying (Davidson et al., 2015).

The training and riding of horses involves isolating them from conspecifics and controlling their physical movement (Starling et al., 2016), working in direct opposition to their inherent need for friends, forage, and locomotion. Advances in recognizing signs of conflict, distress, fear, and pain in the ridden horse can make equestrian activities safer for everyone involved, primarily the horse and rider. Conflict behaviours occur when the horse is exhibiting signs of physical and/or mental discomfort. This typically happens where there are two or more competing triggers for separate behaviours that cannot be expressed, i.e. when a horse is being ridden away from a group of horses it is ‘motivated’ to stay with the herd and simultaneously ‘motivated’ to respond to the rider’s signal (Hall & Heleski, 2017).

However, it is thought that signs of irritation and frustration in the horse may indicate more than just competing motivations (Hall & Heleski, 2017). They may also be indicative of pain avoidance and escape behaviours, both of which are considered conflict behaviours in response to musculoskeletal pain caused by the presence of a rider or problems with equipment, physical issues that may not be noticeable when the horse is lunged or exercised in hand (Dyson, 2017a; Dyson, 2017b; Mullard et al, 2017).

Qualitative behavioural assessment (QBA) is a useful tool to evaluate a horse’s attitudinal and emotional response to a specific event, enabling an assessment of the horse’s mental state during competition, or how the presence of humans influence how a horse behaves. These assessments take into account the animal’s movement and posture and describe them in terms of demeanor; ‘relaxed’, ‘content’, anxious’. The horse’s body language is interpreted as a direct reflection of its mental state. However, in applying this method of data collection, individual observers are permitted to incorporate what is known as Free Choice Profiling, which allows them to develop and apply their own descriptors to score the behavioural expressions of the animals (Fleming et al., 2013). This aspect of QBA works in direct opposition of the need to develop and use robust and valid objective measures to methodologically collect data and foster reporting that will advance equitation science for the benefit of both horse and human (Pierard et al. 2015).

Physiological measures of heart rate, cortisol levels, and tension or pressure from equipment and rider cues have traditionally been used to assess welfare in the ridden horse. However, there is increasing debate around the validity of heart rate and cortisol measures and whether it is possible to adequately discriminate between the effects of physical exercise versus emotional experience (excitement/arousal/fear/anxiety) of the horse in relation to the findings from physiological data (Hall et al., 2014; Hall & Heleski, 2017; Waran & Randle, 2017).

In a study involving 12 equestrian professionals and 10 horses, Hall et al. (2014) investigated the correlation between observed behaviours and physiological measures of salivary cortisol and eye temperature. They found there was little correlation between the behaviour assessments and the physiological evidence, illustrating that further evaluation of both methods is needed to ensure their accuracy as tools to effectively assess stress and behaviour of ridden horses.

It has also been suggested that the techniques and equipment used to sample physiological data are invasive and may directly affect the results (Waran and Randle; 2017). Figure 1 serves to illustrate the complexities involved in accurately monitoring various pressure or tension points, and the number of gadgets required. 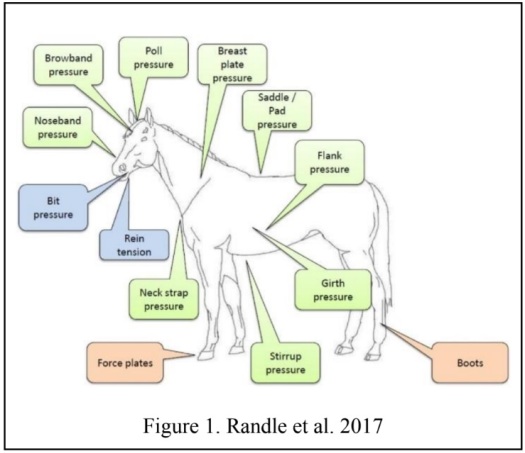 A model widely espoused by practitioners of natural horsemanship, there is considerable debate about the degree of relevance equine social behaviour has in relation to the ethogram of the ridden horse. On the one hand, Hall & Heleski (2017) and McGreevy et al. (2009) suggest that the equine social ethogram may be beneficial to the interpretation of ridden horse behaviour. Yet they simultaneously question the validity of horse-horse interactions and communication as a model for horse-human interactions.

While a comprehensive equine ethogram aids in the understanding of horse-horse interactions and there is an inherent human desire to look for the existence of analogues in human-horse interactions, such analogues should be applied with caution. The impact and relevance of analogues of the equine ethogram in common equestrian and management techniques should be used and interpreted carefully to avoid connotations of anthropomorphism and ascribing the horse with a level of intention or motivation that exceeds its cognitive abilities (McGreevy & McLean, 2007; McGreevy et al., 2009). Furthermore, while there may be evidence of human-horse, horse-human interactions that are analogous to social interactions between horses, these do not translate when the horse is ridden. Difficulties in equitation are experienced by both horse and rider due to the inability to integrate the equine sociogram into riding techniques (Goodwin et al., 2009).

Rideability assesses both the comfort level of the rider and the degree of ease with which a horse can be ridden. The responses of the horse to signals from the rider are evaluated, which often directly correlate to the experience of the rider, since the horse should be under their control or direction at all times. Assessing behaviour in the ridden horse is complex, as the actions of the rider and resulting effect on the horse’s behaviour must be assessed simultaneously. This method is primarily subjective and dependent on who is observing the behaviour – judge, rider, impartial observer – and how they interpret the observations. Scoring may include tail-swishing, position and movement of the rider’s hands, shying, and gait changes. The only truly objective measure is that of rein tension. Overall, the behaviours consistent with a high score of ‘rideability’ are unclear (Hall & Heleski, 2017).

A common theme with all of the above methods is a focus on detecting conflict behaviours associated with competing motivations, tension and stress, with limited mention of assessing whether the horse is experiencing pain associated with the presence of equipment and/or weight of a rider. In recent years, there has been an increased focus on the need for and development of a comprehensive ethogram of the ridden horse that is applicable across a range of scenarios and disciplines, a method that can be used by anyone to evaluate conflict, stress and irritation, and detect pain in horses across a wide range of equestrian pursuits (Hall & Heleski, 2017; Hall et al., 2013; Mullard et al., 2017).

Dyson, S. (2017a). Facial Expressions Research – is your horse trying to tell you he’s in pain? Apr 28, 2017. Retrieved from https://www.youtube.com/watch?v=JKzwPrIShTY

Papachristo, A., Edwards, E., Dowrick, A. and C. Gosling. (2014). A description of the severity of equestrian-related injuries (ERIs) using clinical parameters and patient-reported outcomes. International Journal of the Care of the Injured 45 (2014) 1484-1487.